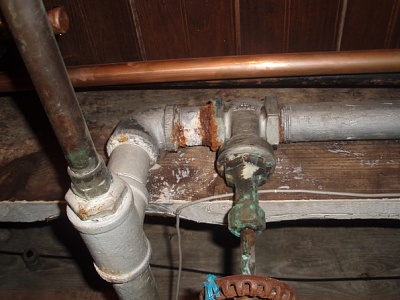 If your home was built before 1980, chances are you have galvanized hot and cold water piping. While there are some pros to galvanized steel piping, any in your home right now has likely reached the end of its usefulness.

Galvanized piping was originally seen as an economical alternative to lead-based piping. It was cheaper than both copper piping and plastic piping, making it a popular choice in the plumbing industry. It was also wider in diameter, which meant more water flow could through it than other options.

However, in time, some disadvantages of galvanized steel piping have been realized.  Steel pipes are galvanized once they’re dipped into molten zinc. Preventing rust is the main purpose of this zinc coating. The problems come over time when this zinc layer is compromised. This causes the pipes to corrode faster. Once the pipe’s interior further corrodes and more rust build ups, lead can possibly be released into you and your family’s drinking water.

Even worse, because galvanized steel piping is so heavy, repairs are labor intensive and a significant investment with no guarantee you won’t run into the same problem in 2 to 3 more decades.

This is why thousands of houses in the Los Angeles have been re-piped with copper piping. Still, many have not. This is where we can help.

How to Determine You Have Galvanized Piping

If you’re not sure what types of piping your home has, find the area where pipes enter your house. Take a nickel and carefully scratch the pipe. If the pipe’s surface is the color of a penny, you most likely already have copper piping. If it’s a black with visible clamps, you’ve got plastic pipes. If it’s a steel-gray color, then you have older galvanized steel pipes that should probably be replaced soon.

Are you noticing rusty water when you first turn your faucet or shower on?

How about brown stains in your sink or bathtub. That’s a sign there’s iron in your water, most likely brought on by the corroding and rusting interior of a galvanized water pipe.

Low water pressure when you’re running more than one plumbing fixture at a time is another indicator that you have galvanized piping. Deposits within the piping restrict water flow, which decreases water pressure in your home.

Water leaks are another sign of a galvanized water pipe issue. Leaks occur when the pipe corrodes at the joints. Water pressure can also impact other parts of the pipe to bring on a leak.

These leaks are often undetectable in their early stages. They’re located behind your walls or under your flooring. It’s usually not until your home has sustained extensive damage that you’re even aware of their existence. By the time this happens, you may not only have to foot the bill to replace the pipes, but damages to your flooring, ceilings, drywall, foundation, or wooden support beams. This is why you need to contact a plumber immediately for leak detection if any damages like this are visible.

Mold and possible termite infestation are other concerns.

Repairing a galvanized pipe leak is a temporary fix. After all, a galvanized pipe, even if repaired, is going to continuously rot from the inside out. A complete repipe is inevitable. Galvanized steel pipes generally have a lifespan of 25 to 40 years. Even if you opt for a repair, you WILL have to repipe at some point. It’s not a matter of IF, but rather WHEN.

What Is a Repiping?

A repipe is the process of installing new copper hot and cold water piping that is routed throughout your home to replace the old galvanized pipe to all sinks, showers, and toilets. Not only does copper pipe solve all of the problems created by galvanized piping, it also adds value as an upgrade to your home.

If you’re a homeowner in need of repiping in Los Angeles or Ventura County, we can repipe most two bathroom homes within two days or less. All while you remain in your home.

Our Ventura and Los Angeles repiping service is an extensive job. Over the last 25 years, we’ve performed 1,000 thousand repiping jobs in this region. We’ve mastered this process with precision and care. Our goal is to minimize the intrusion on your family and home. Don’t be fooled by firms that claim they can repipe your home in less than one day. Repiping takes precision and care, and the faster the repipe, the less precision and care you get.

If you believe you may have galvanized piping, you’re in need of piping repairs, or you feel it might be time to replace outdated piping, contact T-Top Plumbing today at http://www.ttopplumbing.net/contact/ or call (805) 527-8867.

We recognize that heightened diligence and focus on health and safety is required during these challenging times. Our employees are following CDC's recommendations for cleaning and disinfecting surfaces and maintaining hand hygiene. The health and the safety of our employees and customers is always our highest priority.